8 Things to Know When Entering a Mass Casualty Scene 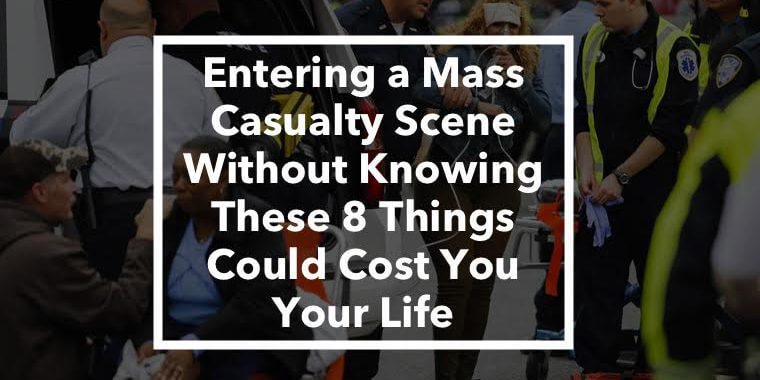 When a mass casualty event takes place, action needs to be taken immediately to ensure that it is contained and resolved as soon as humanly possible. Often the actions of the first arriving crew can set the tone for whether a mass casualty scene is handled correctly, or poorly. Competent handling of a mass casualty situation can bring it to an end as quick as possible, which is the goal of everyone involved. Medical teams need to have an understanding of how to assess the scene initially and provide triage and transport to the wounded. To ensure this process goes as smoothly as possible, there are eight things for EMS teams to keep in mind and follow when arriving on a mass casualty incident.

Medical teams need to set up command and establish who is in charge of the whole operation. Typically the senior EMS official becomes the Medical Branch Director and usually doubles as the Incident Commander (IC). Sometimes, legal rules end up putting a less experienced person in charge, and this should be avoided whenever possible. If multiple agencies are responding to the scenario, they need to meet before to pick a leader, and it should be decided not on legal technicalities, but on merit. The first responding team is not only responsible for setting up command, but also evaluating the scope of the incident.

Once a leader is established, chain-of-command must be created from there. Reliable information needs to be able to flow up and down the chain of command with speed. Each person involved with the scene should have only one higher-up to report to. A good idea for leaders is to set up position vests even during smaller incidents, so that team members can see where they rank in the chain of command and who to report to.

When trying to deal with an entire mass casualty incident, it needs to be broken down into smaller specific goals. The incident commander is responsible for creating this plan and communicating it to first responders. This can either be done verbally or by an ICS planning section.

3. Have a Transfer of Command Process in Place

There should be three supervisors for every seven responders, any more than this and the ICS system needs to be expanded to deal with the scope of the situation. This number can vary, but it is a general baseline ratio to follow.

When more than two different agencies are involved, the terminology needs to be kept as necessary and understandable as possible to avoid miscommunication and confusion.

6. Get Everybody on the Same Page

Everybody needs to be able to hear the communication being sent out from the same source. Too many different radio frequencies are difficult to tie together, and this can lead to a communication failure across the board.

7. Bring the Right Equipment for Evacuation

To save as many lives as possible, injured victims need transportation to hospitals where they can receive full care. EMS teams need to be equipped with the right tools to evacuate victims efficiently. Such items as the Evacuation Slyde make this process a whole lot easier.

Arriving on the scene of a mass casualty can be disorientating for EMS teams. The eight different rules discussed in this article will help any first responder to begin providing care to victims as quickly and safely as possible and avoid poor communication with other personnel on the scene.

In recent years it is becoming more and more imperative to have an emergency evacuation plan and the proper tools at your disposal. Adding an Evacuation Slyde to your safety equipment and procedures will increase your ability to handle various situations. Especially in large crowds, situations can become instantly chaotic and disrupt potential rescue efforts.

The traditional sleds that are currently being used are difficult to maneuver and can take a long period of time to remove the injured from the situation. The Evacuation Slyde has been designed so that a single person can carry multiple sleds into an emergency situation and remove numerous injured regardless of their stature.