Most People Forget These 3 Crucial Aspects After a Mass Shooting 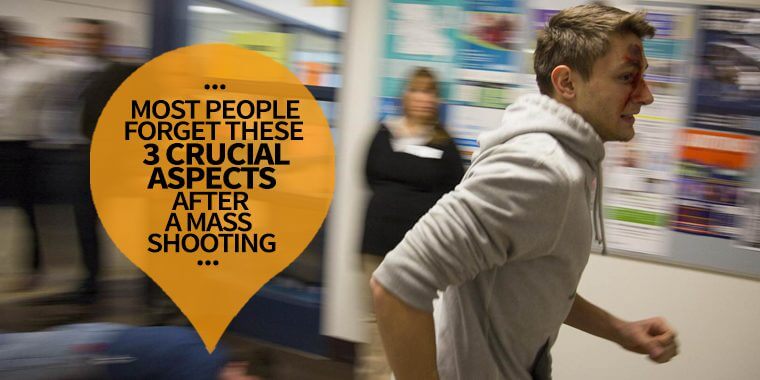 Any police officers that might be responding to the scene are trained to go directly to the area where shots were last heard. Their primary objective is to take out the shooter, and will not stop to help any wounded until the gunman is eliminated. Rescue teams will follow the officers in, to deal with any wounded. The first responding officers usually will come in pairs and they might be dressed in regular police uniforms, or they might be more heavily armored wearing kevlar vests with helmets and rifles.

No matter what the police show up looking like, your employees need to be trained to recognize them when they appear, and to follow their orders at all times. They should not fear the police officers as they are there to help. When the police show up, employees should drop anything they have in their hands and keep them visible to the officers at all times. Even after you have left the danger zone in a shooting scenario, the entire scene is still a crime scene and witnesses should not expect to leave right away until they have been identified and questioned by police.

Naturally, one of the first things people want to do after being in a life threatening situation like an active shooter scenario is to link up friends and family to let them know that they are ok. Witnesses of a shooter situation should be prepared for lengthy interrogation by detectives, however. If you are in dire need of emotional support, you can lean on the first responders and other compassionate people in the area.

Of course, grief counselors and stress management teams should be readily available after such an incident, for anybody who needs them. Bosses must be understanding of employees who are unable to return to work immediately following a shooter scenario. Maintaining good communication with everybody involved will help them return to work faster. Be prepared for the buzz of the situation to last for weeks, including media interviews and extensive investigations.

The best way to deal with an active shooter situation is to prevent it altogether. Make sure employees have avenues to express their griefs with the company, and encourage employees to report anybody who seems to exhibit extreme contempt or anger towards the company. This can take the form of anything from direct threats to subtle hints of intended violence towards the workplace. The human resource department should have a method for quickly processing any report and dealing with them as soon as possible. If someone is showing signs of possibly becoming violent towards their workplace, employees should not hesitate to report that person, and such reports should be encouraged.

Active shooter situations are an unfortunate new aspect of our society. Knowing what to expect during the immediate moments after one, and how to prevent them all together is a piece of knowledge that all employees and civilians should have. Remembering the three aspects discussed in this article can help someone to better deal with and move on from a tragic situation like a workplace shooting.

Be Prepared: In recent years it is becoming more and more imperative to have an emergency evacuation plan and the proper tools at your disposal. Adding an Evacuation Slyde to your safety equipment and procedures will increase your ability to handle various situations. Especially in large crowds, situations can become instantly chaotic and disrupt potential rescue efforts.

The traditional sleds that are currently being used are difficult to maneuver and can take a long period of time to remove the injured from the situation. The Evacuation Slyde has been designed so that a single person can carry multiple sleds into an emergency situation and remove numerous injured regardless of their stature.